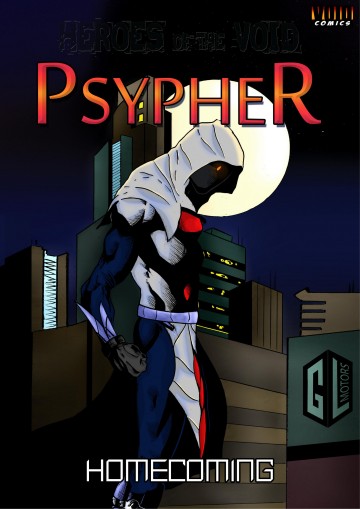 Five years ago, during a hunt that lasted for several weeks, the superhero known as Psypher finally confronted and battled the terrorist known as Living Nightmare. During this battle, the hero managed to distract and trap the Living Nightmare long enough for the police to unmask and arrest this madman. His real name was Mark Beauredin and he was a low level chemist at GL Motors. Psypher, however, got fatally injured during the battle and died right there on the spot of his last victory, after almost twenty years in service of the people of New Steed City. He was revealed to be Jonathan Spade, a small time physics teacher from Ohio and his heroic deeds awarded him a posthumous badge of honor. Five years later a series of terror attacks, not unlike those the Living Nightmare was responsible for, rock the nation. While Beauredin himself is still in prison, it looks like somebody else has taken up his mantle and continues his work. But rumor has it a mysterious cloaked figure has been seen lately, stalking the criminals. Now the people of New Steed City are asking if Psypher is back, if he survived his battle with Living Nightmare or if somebody else has taken over the identity of the hero. Collects Psypher #1-5

This digital comic is available in english version. The following reading modes are available with the izneo reader:
Psypher- Volume 1 - Homecoming (Collection) - Ezekiel Rage - to read online on izneo or download on your iOS and Android tablet or smartphone.

Read the album
Add to cart
Added to your cart
V.2 - C.10 - Psypher
(1)
$2.99
Five years ago the superhero known as Psypher sacrificed himself to stop the terrorist called Living Nightmare. Nightmare was arrested and Psypher was given a hero’s funeral. Now somebody else has taken up the mantle of Psypher. After witnessing several events that would mentally break anyone, Psypher has terrifying nightmares. He heads out every night trying to find a connection between the outbreaks of violence and how it ties to the SanCorp corporation. But the real question is: Who is the new Psypher?

Psypher- Volume 1 - Homecoming (Collection) - Ezekiel Rage - to read online on izneo or download on your iOS and Android tablet or smartphone.
New

Read the album
Add to cart
Added to your cart
V.1 - C.1 - Orchid
(1)
$2.99
Lánhuā Wen, codename Orchid, works for the A.D.S. and not only is she the top ranked infiltrator of the organisation, she is also their best female melee fighter, a cunning tactician and has a degree in psychology. And she is supposed to be on vacation.