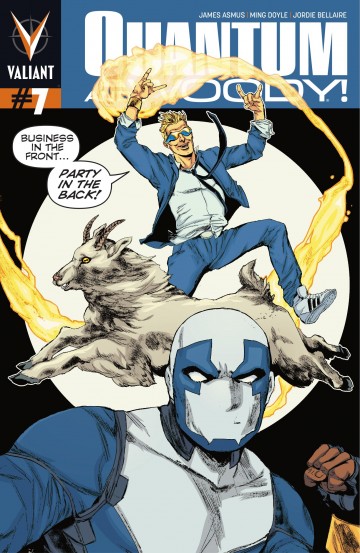 So…two superheroes, a clone, and a goat move into a junior two- bedroom… As a totally questionable romance blossoms between Woody and his runaway science experiment girlfriend, Eric finds himself quickly rising through the ranks of his new employers at Magnum Security. But when he comes to find that his duties as an on-staff superhero are bit more unsavory than he ever expected, it’s down to Quantum, an old army buddy, and Woody—interloper!—to discover the illicit truth behind Mr. Magnum’s all-seeing private security empire.

This digital comic is available in english version. The following reading modes are available with the izneo reader:
Quantum and Woody- Volume 1 - Quantum and Woody (2013) #7 - James Asmus - to read online on izneo or download on your iOS and Android tablet or smartphone.

Read the album
Add to cart
Added to your cart
V.3 - Quantum and Woody
(0)
$14.99
There’s a new scourge sweeping the streets of the big city – ROBO- CRIME! Eric needs to know he can trust Woody — and that means Woody needs to get a job, open a bank account, sign up for a library card, and do all the things a responsible adult does. But when a new gang of rogue mad-scientist super-criminals launch a wave of robot-enabled mega-crimes, will Woody stop them…or join them? Plus: the return of Edison’s Radical Acquisitions and the thrilling secret origin of… the one and only Goat! Collecting QUANTUM AND WOODY #9-12 and QUANTUM AND WOODY: THE GOAT #0, the world’s worst superhero team unleashes a volatile new batch of high-stakes hijinks right here with an all-new collection of adventures from award-winning writer James Asmus (Thief of Thieves) and acclaimed artists Tom Fowler (Hulk: Season One), Kano (Gotham Central), Wilfredo Torres (The Shadow: Year One), and Erica Henderson (Subatomic Party Girls)!

Read the album
Add to cart
Added to your cart
C.12 - Quantum and Woody
(0)
$3.99
Beaten! Bloodied! Bamboozled! Quantum and Woody took the battle straight to the enemy – the mad-science cabal called Edison’s Radical Acquisitions and their mysterious, monstrous new leader – and the enemy kicked their ass! When these rogue biologists (and roboticists) get their hands (and robo-claws) on their new lab subjects, Quantum and Woody are as good as vivisected! (And, by vivisected, we mean dead.)

Read the album
Add to cart
Added to your cart
Quantum and Woody by PRIEST & BRIGHT Vol. 1: KLANG TPB
(0)
$19.99
The complete collected adventures of the original world’s worst superhero team — now in trade paperback! Re-presenting the seminal series from legendary creators Christopher Priest (Black Panther, Deadpool) and MD Bright (Green Lantern, Iron Man) one volume at time, discover the groundbreaking series that Kotaku calls “one of the funniest superhero comics ever” with an all-new edition collecting Quantum and Woody’s origin and disastrous early adventures! Sometimes the best friends make the worst partners. Once inseparable, childhood friends Eric Henderson and Woody Van Chelton haven’t seen each other in years. Reunited by the mysterious deaths of their research scientist fathers, the unlikely duo find themselves stuck together all over again when a catastrophic lab accident transforms their bodies into pure energy — energy that will completely dissipate if they don’t “klang!” their control bands together every 24-hours! Now, armed with an array of high-tech gadgets...and two horribly mismatched personalities...and a goat for a sidekick...this pair of misfits has decided to set the world straight as the world’s worst superhero team, Quantum and Woody...if they can manage to quit fighting each other first! Collecting QUANTUM AND WOODY (1997) #0–7, plus rarely seen materials and extras from QUANTUM AND WOODY: THE DIRECTOR’S CUT TP

Read the album
Add to cart
Added to your cart
Quantum and Woody by PRIEST and BRIGHT Vol. 2: Switch TPB
(0)
$19.99

Read the album
Add to cart
Added to your cart
Quantum and Woody Deluxe Edition Book 2 HC
(0)
$49.99
A tribute to women in comics & manga!
Enjoy adventures from a female perspective!

Read the album
Add to cart
Added to your cart
Transformers: Bumblebee - Win If You Dare
(1)
$5.99
Life can feel rough when you aren't the fastest, or the bravest, or the tallest Autobot, and Bumblebee's feeling the pressure. When he’s hurt, Bumblebee takes it upon himself to prove his worth to his fellow Autobots. Things get tense as 'Bee and his new human companion race into action hunting down dangerous foes and a devastating device. It's ready, set, go in this new exciting '80s adventure packed filled with laughs and thrills!