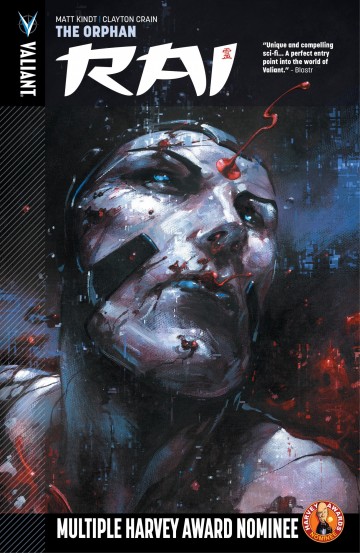 Rai falls to Earth in…“THE ORPHAN”! Broken, beaten, and cast down to Earth, Rai and his allies now find themselves hunted, persecuted, and imprisoned for their failed rebellion against Father. Stranded thousands of miles from his former home, Rai is now more determined than ever to save his friends and bring down New Japan’s malevolent ruler once and for all…but how can he do that from Earth? And just what secrets will New Japan’s rising son discover as he journeys across the face of a planet scarred by his nation’s ascent to the stars? Superstar creative team Matt Kindt (THE VALIANT, DIVINITY) and Clayton Crain (Carnage) return to their one-of-a-kind vision for the future as Rai discovers the true fate of the world New Japan left behind…and the Earth of 4001 is revealed! Collecting RAI #9-12.

This digital comic is available in english version. The following reading modes are available with the izneo reader:
Rai- Volume 3 - Rai Vol. 3: The Orphan TPB - Clayton Crain - to read online on izneo or download on your iOS and Android tablet or smartphone.

Read the album
Add to cart
Added to your cart
V.4 - Rai
(0)
$14.99
Rocketing out of the pages of 4001 A.D...the origin of Rai revealed! For the first time ever, witness the violent foundation of Father’s space-born utopia of New Japan...and, with it, the shocking genesis of the line of guardians that bear the name Rai! Born and bred by Father to enforce peace at any cost, follow the first Rai and his successors across two millennia as they chronicle the history of 4001 A.D. - from the launch of New Japan into orbit to the latest Rai’s crusade to bring it crashing back down to Earth! Valiant mastermind Matt Kindt (4001 A.D.) and visionary artist CAFU (UNITY) uncover the never-before-told story of New Japan’s rise to power...and reveal just how the Valiant Universe of today became the 4001 A.D. of tomorrow! Collecting RAI #13-16.

Read the album
Add to cart
Added to your cart
C.3 - Rai
(0)
$3.99
Nothing is what it seems…not even yourself… A seemingly random murder – the first in a thousand years – is unraveling the mysteries at the heart of Rai’s very existence. As the country of Japan completes another orbit around 41st century Earth, Rai, its sole protector, turns his investigation toward two figures he never questioned before: Father, the A.I. that controls Japan…and himself.

Read the album
Add to cart
Added to your cart
Rai Deluxe Edition Book 1 HC
(0)
$39.99
From New York Times best-selling writer Matt Kindt (DIVINITY, THE VALIANT) and superstar artist Clayton Crain (Carnage), discover the world of 41st century Japan with an all-new vision of the future unlike anything you’ve seen before – now in deluxe, oversized hardcover! The year is 4001 A.D. – led by the artificial intelligence called “Father,” the island nation of Japan has expanded out of the Pacific and into geosynchronous orbit with the ravaged Earth below. With billions to feed and protect, it has fallen to one solitary guardian to enforce the law of Father’s empire – the mysterious folk hero known as Rai. They say he can appear out of nowhere. They say he is a spirit…the ghost of Japan. But when the first murder in a thousand years threatens to topple Father’s benevolent reign, Rai will be forced to confront the true face of a nation transformed…and his own long-lost humanity… Collecting RAI #1–12, along with material from RAI #1 PLUS EDITION and RAI #5 PLUS EDITION, this prestige-sized hardcover comes packed with more than 20 pages of rarely seen art and extras direct from the Valiant vaults.
A tribute to women in comics & manga!
Enjoy adventures from a female perspective!

Rai- Volume 3 - Rai Vol. 3: The Orphan TPB - Clayton Crain - to read online on izneo or download on your iOS and Android tablet or smartphone.
Coming soon

Pre-order
Added to your cart
BRZRKR Vol. 1
(0)
$15.99
The man known only as Berzerker is half-mortal and half-God, cursed and compelled to violence...even at the sacrifice of his sanity. But after wandering the world for centuries, Berzerker may have finally found a refuge – working for the U.S. government to fight the battles too violent and too dangerous for anyone else. In exchange, Berzerker will be granted the one thing he desires – the truth about his endless blood-soaked existence…and how to end it. Keanu Reeves makes his comic book writing debut alongside New York Times bestselling co-writer Matt Kindt (Folklords, Grass Kings) and legendary artist Ron Garney (Captain America, The Amazing Spider-Man) in a brutally violent new series about one immortal warrior’s fight through the ages. Collects BRZRKR #1-4.
Coming soon