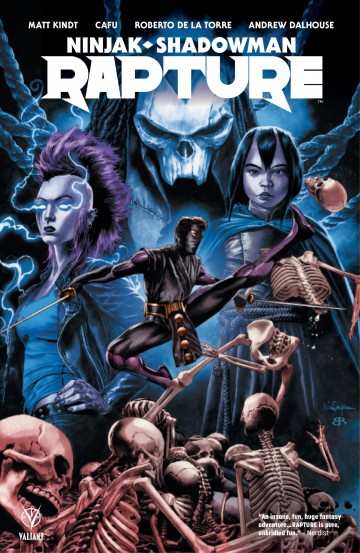 On a scarred landscape, two otherworldly armies prepare to battle one last time, vying for control of a massive tower named from an ancient language no longer permitted to be spoken. One army is led by a primeval force named Babel, whose goal is singular: to breach “Heaven” no matter the cost. The only thing standing in his way is a gray-haired barbaric warrior, filled with rage and regret, a man who sees this battle as his last chance for redemption. But he knows his depleted forces have little chance of victory unless aid comes. Enter Tama: A 12-year old girl on the crest of a hill overlooking the battle, who has just become humanity’s only hope. The last in an ancient line of mystics who protect the Earth, she has foreseen this battle and knows millions will perish if she’s unable to stop it. Now Tama and her ragtag team of malcontents – Ninjak, Shadowman and Punk Mambo – must somehow defeat an elder god hell bent on piercing the heavens. New York Times best-selling writer Matt Kindt (X-O MANOWAR) and artistic sensation CAFU (RAI) lead a Tolkien-esque journey into the space between life and death…through the Deadside… and into the many worlds that lie beyond right here with a spellbinding and horrific standalone volume! Collecting RAPTURE #1–4.

Read the album
Add to cart
Added to your cart
Fear Case
(1)
$11.99
A new, horrific detective series by Matt Kindt (Ether, Mind MGMT) and Tyler Jenkins (Grass Kings)! A no-nonsense Secret Service agent and his new-age partner investigate a mysterious box known as the "Fear Case," which has appeared throughout history at sites of disaster and tragedy. Whoever comes into possession of this case must pass it on within three days or face deadly consequences. The agents must track down this Fear Case while staying one step ahead of a psychotic cult and the otherwordly forces behind the Case's existence. Collects Fear Case #1-#4.
New

Read the album
Add to cart
Added to your cart
Ether Library Edition
(1)
$35.99