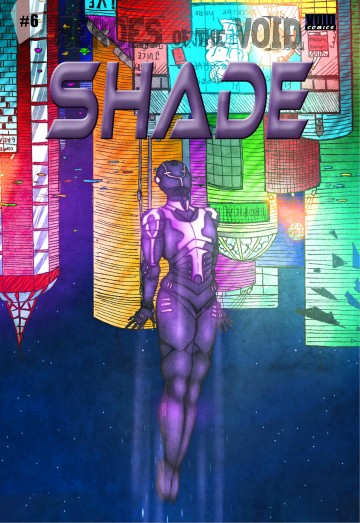 Jara Bint Rih got injured during World War 3 and spent the last three yeas of her life in search of a suit she hoped would restore her ability to walk. She and her best friend Lucia Mason found the suit when they were attacked by a gang. But Jara managed to fend the gang off by using the suit. Now, as Shade, she fights to bring down Meta Systems, a multi-billion dollar corporation doing human experiments and building war machines and its boss, the one responsible for her injury in the first place: Ashley Simmons.

This digital comic is available in english version. The following reading modes are available with the izneo reader:
Shade- Volume 1 - Sky High - Ezekiel Rage - to read online on izneo or download on your iOS and Android tablet or smartphone.

Read the album
Add to cart
Added to your cart
V.1 - C.1 - Shade
(1)
$9.99
The year is 2099 and a devastating war that lasted for almost 20 years is coming to an end - a war between humans and evos, a new race that emerged from the ashes of a biological attack on the entire earth. World War 3 as they call it shall be remembered as the last war on the entire planet, as a world peace treaty has been signed by all nations that remained.Jara Bint Rih was a soldier in this war - fighting for America, the place of her birth and a world free of oppression for everyone, human and mutant alike. But that belief cost her dearly. In an attack on her convoy she and her comrades were slaughtered. Most died and her spine was destroyed. Now she is confined to a wheelchair - alive but disgraced. Living alone in the poor district of New York she spends her days in her friend Lucia's garage, searching for remnants from the past. But her world is about to change forever... Collects Shade #1-5

Shade- Volume 1 - Sky High - Ezekiel Rage - to read online on izneo or download on your iOS and Android tablet or smartphone.
New