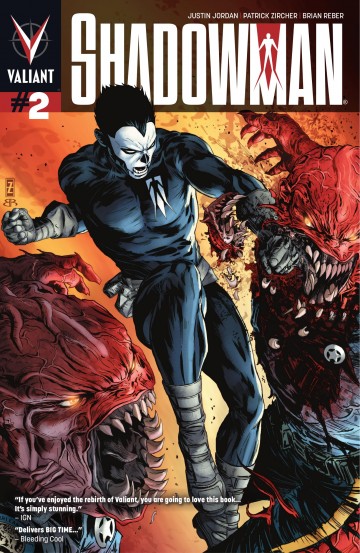 Shadowman’s first night on the job may just be his last. Jack Boniface has become the next Shadowman, which would be great if he had any idea what he was doing. But he doesn’t and he’s out of time. Master Darque has dispatched the terrifying Mr. Twist to destroy Jack, and the demonic creature is tearing through half of the Big Easy in search of his prey. If the Abettors — the mysterious organization that’s spent hundreds of years protecting New Orleans — can reach Jack first, he’s got an outside shot at making it through the night. Find out if he’ll live to see tomorrow when the return of the legendary Shadowman continues this December!

This digital comic is available in english version. The following reading modes are available with the izneo reader:
Shadowman- Volume 1 - Shadowman (2012) #2 - Dave Johnson - to read online on izneo or download on your iOS and Android tablet or smartphone.

Read the album
Add to cart
Added to your cart
Shadowman Deluxe Edition Book 2 HC
(0)
$39.99
Become a super reader
Write reviews and get comics for free!

Shadowman- Volume 1 - Shadowman (2012) #2 - Dave Johnson - to read online on izneo or download on your iOS and Android tablet or smartphone.

Read the album
Add to cart
Added to your cart
Planet of the Apes/Green Lantern
(0)
$9.99
Cornelius discovers an ancient ring in the Forbidden Zone and unlocks a power that echoes across universes. With the Green Lantern Corps, led by Hal Jordan, racing to get to the source of this power before Sinestro can get his hands on it, they will discover a truth about the Guardians that will change them forever on THE PLANET OF THE APES. From writer Robbie Thompson (Silk; Spidey; Supernatural), Justin Jordan (Green Lantern: New Guardians, Luther Strode) and artist Barnaby Bagenda (Omega Men) comes the war of the Green Lanterns on the Planet of the Apes!