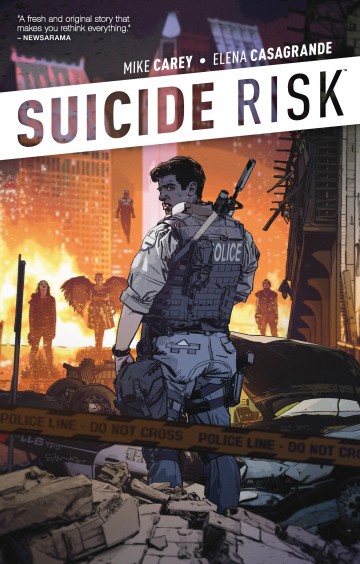 Eisner Award-nominated writer Mike Carey (UNWRITTEN, X-MEN: LEGACY) brings his first original ongoing series to BOOM! Studios! Heroes are dying, and cops are dying twofold. Humanity is underpowered in the face of their onslaught, and people are suffering untold casualties trying to stem the flow. After barely surviving a super-powered bank heist gone horribly wrong, beat cop Leo Winters vowed to try and find a way to stop them. Following a lead, he discovered two lowlifes who seemed to be able to grant a person powers...for the right price. Thing is: you don't get to choose which power. It's seemingly random, a crap-shoot, a risk. Will Leo decide to take that risk? And why is it that even the heroes in this world eventually break...bad? Eisner Award nominated writer and novelist Mike Carey (UNWRITTEN, X-MEN: LEGACY) and rising star Elena Casagrande (HULK, HACK/SLASH) deliver a smart, mind-bending deconstruction of the superhero genre that will have you questioning your definition of a hero. This volume, featuring a cover by Tommy Lee Edwards (TURF, MARVEL 1985), collects the first four issues of the critically-acclaimed series.

This digital comic is available in english version. The following reading modes are available with the izneo reader:
Suicide Risk- Volume 1 - Suicide Risk Vol. 1 - Mike Carey - to read online on izneo or download on your iOS and Android tablet or smartphone.

Read the album
Add to cart
Added to your cart
V.6 - Suicide Risk
(0)
$7.99
With his newly adopted Earth at stake, Requiem must forge an alliance with a powerful entity more dangerous than himself: Aisa. The follower of a great and ancient goddess, Aisa and her sister Diva may hold the key to closing the F.A.U.L.T.Line once and for all-but on which side will Tracey find herself when they do? Mike Carey (Lucifer, The Unwritten) and fan-favorite artist Elena Casagrande (Hulk, Hack/Slash) conclude the mysterious superhero world of Suicide Risk with this critically acclaimed sixth and final arc. Collects issues #22-25.

Read the album
Add to cart
Added to your cart
V.1 - Suicide Risk
(0)
$4.99
A tribute to women in comics & manga!
Enjoy adventures from a female perspective!

Suicide Risk- Volume 1 - Suicide Risk Vol. 1 - Mike Carey - to read online on izneo or download on your iOS and Android tablet or smartphone.

Read the album
Add to cart
Added to your cart
The Highest House
(0)
$11.99
To be born a slave is a fact, not a fatality. And facts can be changed. In the country of Ossaniul, there is a fortress that is as disproportionate as it is inaccessible: the Highest House. Its masters, the noble family of Aldercrest, reign over a veritable army of slaves. At the bottom of the ladder, young Moth performs the most thankless tasks and has little hope of living past childhood. Until the day he meets Obsidian, a mysterious prisoner of the House who whispers to him in his sleep. If Moth does what he asks, Obsidian will give him fortune and glory. And there’s every indication that Obsidian can make good on his promises. Will Moth accept the offer? Through a subtle alternate history, The Highest House takes us to a fictional country reminiscent of the Balkan kingdoms of the 16th century. Mike Carey and Peter Gross (Lucifer, The Unwritten) draw from this context a captivating fantasy narrative that reflects on the human soul, the corrupting power of slavery, and the inequalities of class, all from the different perspectives of the House’s many inhabitants. Both immediate and timeless, Highest House is a multifaceted fantasy sure to stay with readers long after the final page has turned.