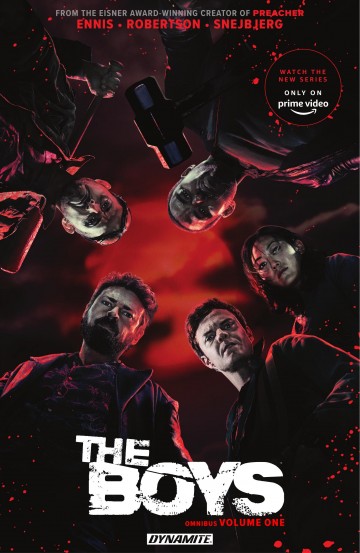 Read the series the Amazon Original show is based on! All-new printing collecting the first 14 issues of the critically acclaimed series, now heading to live-action on Amazon Prime! This is going to hurt! In a world where costumed heroes soar through the sky and masked vigilantes prowl the night, someone's got to make sure the "supes" don't get out of line. And someone will! Billy Butcher, Wee Hughie, Mother's Milk, The Frenchman, and The Female are The Boys: A CIA-backed team of very dangerous people, each one dedicated to the struggle against the most dangerous force on Earth - superpower! Some superheroes have to be watched. Some have to be controlled. And some of them - sometimes - need to be taken out of the picture. That's when you call in The Boys! After the opening story arc introducing Hughie to the team (issues 1-6), Dark avenger Tek-Knight and his ex- partner Swingwing are in trouble (issues 7-14). Big trouble. One has lost control of his terrifyingly overactive sex-drive, and the other might just be a murderer. It's up to Hughie and Butcher to work out which is which, in Get Some. Then, in Glorious Five-Year Plan, The Boys travel to Russia - where their corporate opponents are working with the mob, in a super-conspiracy that threatens to spiral lethally out of control. Good thing our heroes have Love Sausage on their side. Featuring some ever-so-slight tweaks the creators have meticulously restored, The Boys Omniobus Volume 1 also features bonus art materials, the script to issue #1 by Garth Ennis, a complete cover gallery, and more!

This digital comic is available in english version. The following reading modes are available with the izneo reader:
The Boys- Volume 1 - The Boys Omnibus Vol.1 - Garth Ennis - to read online on izneo or download on your iOS and Android tablet or smartphone.

Read the album
Add to cart
Added to your cart
V.1 - The Boys
(2)
$9.99
The Boys- Volume 1 - The Boys Omnibus Vol.1 - Garth Ennis - to read online on izneo or download on your iOS and Android tablet or smartphone.

Read the album
Add to cart
Added to your cart
The Boys Omnibus Vol.5
(0)
$19.99
A tribute to women in comics & manga!
Enjoy adventures from a female perspective!

The Boys- Volume 1 - The Boys Omnibus Vol.1 - Garth Ennis - to read online on izneo or download on your iOS and Android tablet or smartphone.
Coming soon

Read the album
Pre-order
Added to your cart
Space Bastards
(0)
$4.99
In the future, unemployment and job dissatisfaction are sky-high. When you've got nothing left to lose, you join the Intergalactic Postal Service (IPS). Its postal fees are steep—and they go only to whomever ultimately fulfills the delivery, making every run a comically violent free-for-all between the most ruthless mercenaries in the cosmos! The interplanetary ensemble cast of Space Bastards, under the volatile leadership of Postmaster General Roy Sharpton, are constantly at each other’s throats trying to settle scores and earn big money. But when a rival corporation's teleportation technology threatens to make their role in the galaxy obsolete, the Bastards must work together to preserve a job they've come to love.