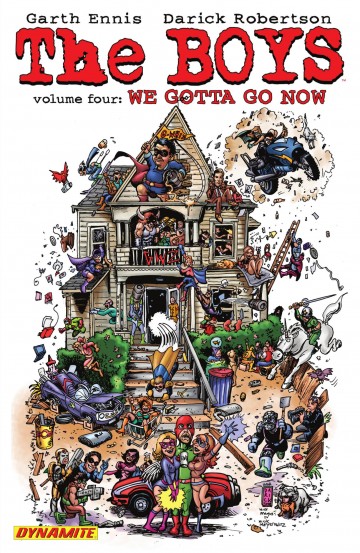 They're outcasts. Renegades. Rogues. Outsiders. They're the world's most profitable superheroes. They're the G-Men. But all is not well with mysterious millionaire John Godolkin's band of misfits. Silver Kincaid, one of the original G-Men, has just committed suicide in the most public and grotesque way imaginable. That's not good news for Vought-American's number one franchise, with G-Force, G-Coast, G-Style, G-Wiz, the G-Brits and the G-Nomads all depending on their slice of the G-pie. There's far too much at stake for anyone to go poking around the G-Mansion now. Who knows what dirty secrets might be waiting down there in the dark?

This digital comic is available in english version. The following reading modes are available with the izneo reader:
The Boys- Volume 4 - The Boys Vol. 4: We Gotta Go Now - Garth Ennis - to read online on izneo or download on your iOS and Android tablet or smartphone.

Read the album
Add to cart
Added to your cart
The Boys Omnibus Vol.5
(0)
$19.99
Become a super reader
Write reviews and get comics for free!

The Boys- Volume 4 - The Boys Vol. 4: We Gotta Go Now - Garth Ennis - to read online on izneo or download on your iOS and Android tablet or smartphone.
New

Read the album
Add to cart
Added to your cart
C.8 - The Boys: Dear Becky
(0)
$3.99
With the aid of some old familiar faces, Hughie’s globetrotting efforts to discover the origin of Becky’s diary finally bear fruit- but is he ready to face the shadowy figure behind the conspiracy that almost destroyed him? Old debts are paid and old scores settled, as the last story of The Boys comes to its conclusion.