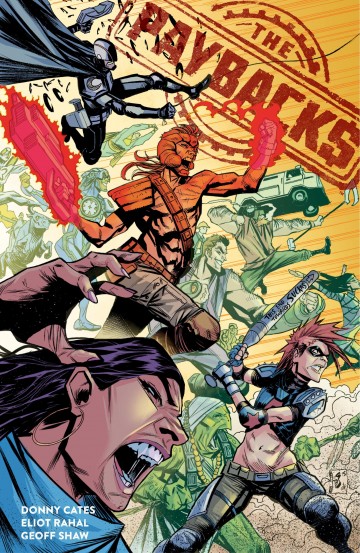 From the team that delivered the smash-hit God Country and critically acclaimed Buzzkill, comes a repo squad composed of bankrupt former heroes here to foreclose on everybody's secret lairs! This superhero parody explores the idea that heroism doesn't come cheap, so when superheroes borrow money to finance their genetic enhancements or crime-fighting supercomputers, their debts make student loans look like I.O.U.'s!

Read the album
Add to cart
Added to your cart
V.7 - Unity
(0)
$14.99
The Armor Hunters never leave a man behind! Multiple Harvey Award nominee James Asmus (QUANTUM AND WOODY) and rising star Diego Bernard (X-O MANOWAR) rocket UNITY into their most action-packed battle yet! GIN-GR, the reformed killer robot who destroyed Mexico City and rampaged through downtown Los Angeles during the Armor Hunters’ attack, has turned on her Unity teammates! As she perpetrates the world’s most unstoppable jailbreak– a head-first, guns-blazing, kamikaze flight straight into the military base that holds her one- time squad – can X-O Manowar, Livewire, Ninjak, and the Eternal Warrior stop the giant engine of destruction… while trapped inside it? Then: Matt Kindt presents the grand finale to his acclaimed two- year run on Valiant’s premier superteam…but not before James Asmus (QUANTUM AND WOODY), Elliott Kalan (The Daily Show), Michael Kupperman (Tales Designed to Thrizzle), and more put Unity through the wringer! Collecting UNITY #23-25.