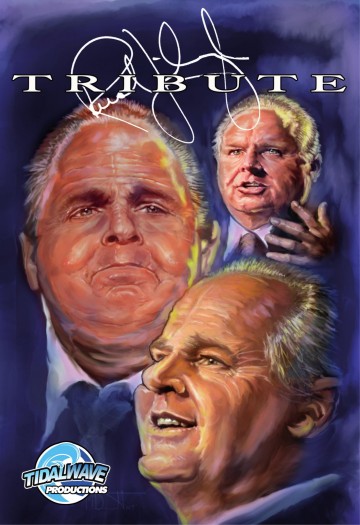 He was called "the most dangerous man in America" as well as "the leader of a vast Right-Wing Conspiracy." Politicians, pundits, and commentators asked, "Is he good for America?" Awarded the Medal of Freedom by President Trump cemented his place as the self-proclaimed "intellectual" center of the United States' Conservative movement. Explore the story of how a simple football fan from Missouri changed the news and radio industry. With the help of over 20 million listeners a week, Rush Limbaugh became the voice of the American right.

This digital comic is available in english version. The following reading modes are available with the izneo reader:
Tribute- Volume 1 - Tribute: Rush Limbaugh - Michael L. Frizell - to read online on izneo or download on your iOS and Android tablet or smartphone.

Read the album
Add to cart
Added to your cart
C.36 - Tribute
(0)
$3.99
Iconic superstar, Whitney Houston broke records in the music and movie industry. She was an idol to millions and adored all over the world. Some even said she had the voice of an angel, but the demons of her past was a creeping ghost on her life which was tragically taken away too soon. Take a look at her past and how she changed the world with just the sound of her voice. This is the life and death of Whitney Houston.

Read the album
Add to cart
Added to your cart
C.1 - Tribute
(0)
$3.99
Tribute- Volume 1 - Tribute: Rush Limbaugh - Michael L. Frizell - to read online on izneo or download on your iOS and Android tablet or smartphone.

Read the album
Add to cart
Added to your cart
Tribute: Ruth Bader Ginsburg
(0)
$3.99
A special comic book tribute about the legendary Supreme Court Justice, Ruth Bader Ginsburg. Ruth Bader Ginsburg once told an interviewer, "My mother told me to be a lady. And for her, that meant be your person, be independent." Whether you agree with her politics or not, you have to admit that Ginsburg was always an independent person. Nominated by President Bill Clinton, Ginsburg served on the Supreme Court from 1993 until she died in 2020. She battled cancer, became a cultural icon, and advanced women's rights, earning the unofficial title, "The Notorious RGB."

Read the album
Add to cart
Added to your cart
Tribute: Rush Limbaugh
(0)
$3.99
Our "indie" publishers & authors!
A selection of independent publishing!

Read the album
Pre-order
Added to your cart
First Family: The Bidens
(0)
$5.99
Joseph R. Biden experienced one of the most challenging journeys in American politics. America’s youngest senator faced an emotional rollercoaster that almost derailed his career. His life, riddled with loss, led to a determination to help the working class and a 47-year career capped by his election as the 46th president of the United States. Dr. Jill Biden is the First Lady of the United States of America, and she is defining that role in a way no other First Lady has before her. A mother, grandmother, and lifelong educator, Dr. Biden has worked tirelessly to raise awareness about women’s issues and issues that affect families. Although she calls community colleges “one of America’s best-kept secrets,” it’s no secret that she’s Joe Biden’s best-known advocate and supporter. Together, they’re out to change our perception of the American presidency. Read their exciting stories in one volume!
Coming soon