Broken but not beaten… Unity has to put down X-O Manowar and avert nuclear war. But Harada’s super-team lasted a grand total of five minutes last issue before they were taken out. Time for Unity 2.0…but how do you get a cast of malcontents, egotists, immortal warriors, and manipulative backstabbers to work together? The answer? You don’t tell them they’re working together. 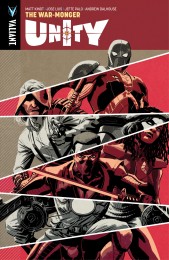 Out of the darkest recesses of the 20th century…the WAR-MONGER rises to rage against the combined might of Valiant’s most elite superteam! For thousands of years, the Eternal Warrior has waged battle; and for thousands of years, one spirit has vexed him…the spirit of warfare itself. Today, Gilad Anni-Padda and his teammates in Unity must reckon with a long – thought-forgotten enemy–unseen since Unit-Y faced it in World War II – now returned to bring destruction and death to the heroes once and for all. Unity may not survive the coming of War-Monger! From New York Times best-selling writer Matt Kindt (DIVINITY) and red-hot artists Jose Luis and Jefte Palo, the unstoppable War-Monger tears a swath through the ranks of Unity right here in the next volume of the chart-topping series IGN calls “a big superhero book done right.” Collecting UNITY #19–22. 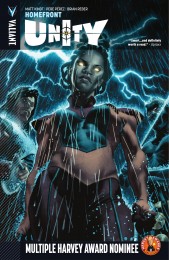 New York Times best-selling writer Matt Kindt (THE VALIANT, RAI) and Harvey Award nominee Pere Pérez (ARCHER & ARMSTRONG) rebuild the world’s most elite super-team one member at a time! The United have left Unity decimated – a member lost, a terrible secret revealed, and the entire world turned against them. Not Harada, not Dr. Silk, not even the mighty Armor Hunters left the team as fractured as this! Now, Unity must decide where their place is in this new world and whether they will stand together or fall apart. Start reading here as Valiant superstars Kindt and Pérez lead the world’s most elite superteam into a concussive showdown that will leave its members reeling...and rebuild Unity one hero at a time! Collecting UNITY #15–18. 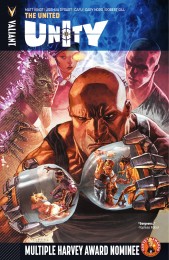 WHO ARE...THE UNITED? A new day has dawned for the elite assemblage of heroes called UNITY, and, in the wake of the Armor Hunters’ invasion, the time has come to grow their ranks. Who will be the next fearless hero to join the roster of the world’s most elite superteam? And just what is the international strike force called THE UNITED – and why have they marked UNITY’s own X-O Manowar, Ninjak, Livewire, and Eternal Warrior for elimination? Join New York Times best- selling writers Matt Kindt (Rai, Mind MGMT), and red hot artists CAFU, Cary Nord and Robert Gill as they look back with the Eternal Warrior to the trenches of WW I and the top secret missions of Unit-Y before detonating the planet’s first superteam vs. superteam war right here with a bold new beginning for UNITY! Collecting UNITY #12-14 and UNITY #0, plus HARBINGER: FAITH #0 by New York Times best- selling writer Joshua Dysart (Harbinger) and rising star Robert Gill (Eternal Warrior). 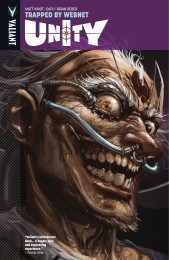 For every action, there is an equal and opposite reaction. First came UNITY… Now meet WEBNET! Coming off of the earth-shattering repercussions of their first mission, Ninjak is leading the newly formed Unity team right back into the trenches to face the Valiant Universe’s next colossal threat – the enigmatic Dr. Silk and his high-tech terror cell: WEBNET! With the fate of untold millions on the line, can this team of cutthroat heroes uncover Silk’s endgame – and his connection to Ninjak’s shadowy past? From New York Times best-selling writer Matt Kindt (Mind MGMT) and superstar artist CAFU (Action Comics), start reading here when X-O Manowar, Eternal Warrior, Livewire and the rest of Valiant’s best-selling superteam begin an all-new, high-stakes adventure! Collecting UNITY #5-7, plus the landmark first appearance of Ninjak from X-O MANOWAR #5! 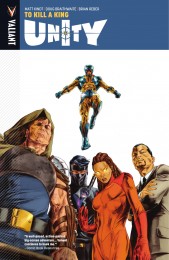 To kill a king…they created an army. The world’s most dangerous man, Toyo Harada, has been struck by the one thing he never thought possible – fear. Halfway across the globe, a new power threatens to topple modern civilization and, to preempt the cataclysm that is to come, Harada will unite the most unforgiving team the world has ever known – UNITY. Their mission: defeat the threat responsible for the destruction of MI-6, the decimation of an alien world, and the occupation of Eastern Europe… Unseat the warrior king armed with the universe’s most powerful weapon… Kill X-O Manowar! Collecting UNITY #1-4 by New York Times best-selling writer Matt Kindt (Mind MGMT) and superstar artist Doug Braithwaite (Justice), discover the greatest heroes of the Valiant Universe right here with the landmark first arc of the chart-topping series that Ain’t It Cool News calls “completely satisfying.”