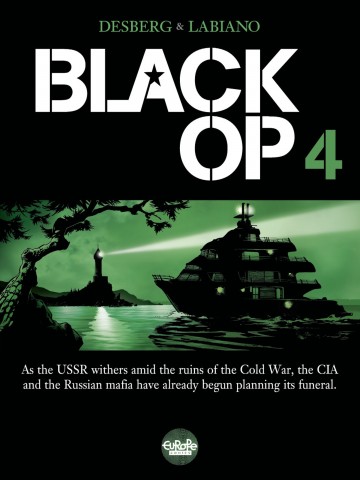 While ex-KGB assassins make their way to the United States, Floyd Whitman is in hiding, waiting for a secret operation to kick off. In the meantime, he takes a trip down memory lane, as he mulls over his life as a secret agent tracking the Russian mafia. But that's not all. He's also thinking about an old flame, Lovna. This is a ruthless thriller about the corrupt American empire that also gives an exciting glimpse of the mysteries of the Cold War. Black OP has become the cult spy series of the Franco-Belgian Comic scene.

This digital comic is available in english version. The following reading modes are available with the izneo reader:
Black Op- Volume 4 - Black Op V4 - Stephen Desberg - to read online on izneo or download on your iOS and Android tablet or smartphone.
eazyComics

Read the album
Add to cart
Added to your cart
V.8 - Black Op
(5)
$5.99 $2.99
Agents Janine Hallbeck and Sol Kathren, posing as husband and wife for their mission, were sent to Tehran in early 1973, on the trail of a priceless secret: the plans for a financial and petroleum manipulation that would have severe repercussions throughout the entire world. The problem is, nobody at the CIA wants to believe it. Except, perhaps, those who see a golden opportunity to line their pockets!
eazyComics

Read the album
Add to cart
Added to your cart
V.4 - Dixie Road
(4)
$5.99
In this final volume of the first Dixie Road cycle, the Jones family is stuck at Silver Creek. Threatened by a deadly case of food poisoning, under siege by the workers’ union, the camp is quickly coming undone. The same can be said of the Dixie family: violence breaks out all over and emotions escalate to a new high in this conclusive album.

Read the album
Add to cart
Added to your cart
Bagdad Inc.
(5)
$8.99
eazyComics