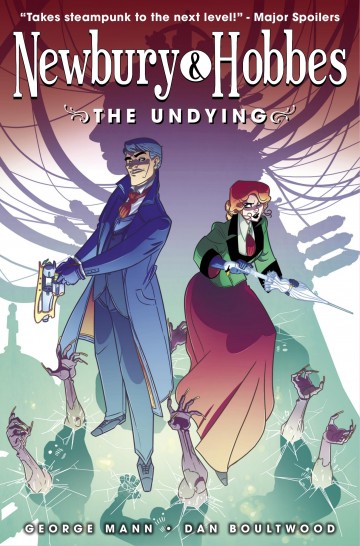 A foul plot unfolds from the depths of London, as bombs rock the city, the dead rise, and Her Majesty is not amused! Discoer the dynamic detective duo Sir Maurice Newbury and Miss Veronica Hobbes, defenders of the Victorian Empire against threats both natural and supernatural. The HIT steampunk mystery novels unleash a new tale by original creator George Mann (‘Doctor Who’, ‘Dark Souls’) with irrepressible illustrations by Dan Boultwood (‘It Came!’, ‘The Phoenix’). Plus, exclusive Newbury & Hobbes prose story! Collects Newbury & Hobbes #1-4. “There is no doubting the talent on show in this book. Fans of Doctor Who or Holmes should find enough to quench their thirst.” – Comic Crusaders “Fans of Alan Moore’s work will enjoy Mann’s description of Victorian asylums, slums, aristocratic soirees and things that go bump in the night.” – Strange Horizons

This digital comic is available in english version. The following reading modes are available with the izneo reader:
Newbury & Hobbes- Volume 1 - Newbury & Hobbes - Volume 1 - The Undying - George Mann - to read online on izneo or download on your iOS and Android tablet or smartphone.

Read the album
Add to cart
Added to your cart
V.1 - C.4 - Newbury & Hobbes
(0)
$4.59
The first Newbury & Hobbes comic series comes to an explosive end, as steampunk detective duo Sir Maurice Newbury and Miss Veronica Hobbes finally face off against an old enemy. Is he back from the dead? Or is he simply undying? A new mystery in the world of the cult hit novel series, from original creator George Mann (Dark Souls, Doctor Who, Warhammer 40,000) with art by Dan Boultwood (It Came!, The Phoenix). Plus, the last part of the brand-new Newbury & Hobbes prose short by George Mann.

Read the album
Pre-order
Added to your cart
Engineward
(0)
$9.99
A post-apocalyptic, zodiac-inspired science fiction mystery with a take-no-prisoners female lead who blazes a trail to correct the past. EARTH IS AN ANCIENT MYTH Earth is long forgotten. Now, the word of the god-like Celestials is absolute, and they rule with brutal efficiency. When Joss, an Engineward, discovers and reactivates the head of an ancient ghoulem, she finds all is not as intended. Her destiny—and that of her world—lies somewhere far beyond the borders of her shantytown.