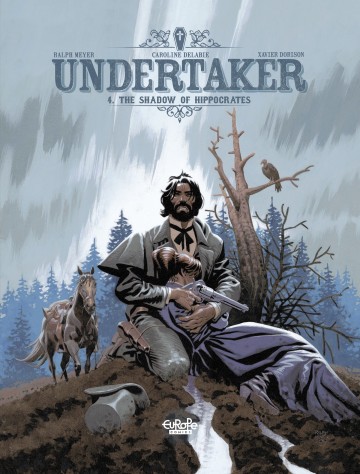 « If you kill me, she dies. And with her, all your little comrades who’ll no longer benefit from my talents. Admit it would be too bad. Besides, without me, at best you lose your leg. At worst..”. Such was the deal the Ogre Quint forced upon the Lieutenant Strikland at the end of the Civil War. Such is the deal the Ogre has imposed once again on Jonas Crow. Jonas is not giving up this time, and although badly wounded, closely tails Rose’s kidnapper - caring perhaps a bit too deeply for the beautiful Englishwoman. But the real danger when you hunt monsters is to become one. And for Quint, “the laws of cockroaches don’t apply to lions”. As the hunt gets more intense, so does its meaning to Jonas, as some of his past is revealed and compared to Quint’s positive achievements. The conclusion won’t be to everyone’s taste and will have huge repercussions on Jonas’, Rose’s and Lin’s lives. ****** This Volume 4 offers the same sharp-tongued dialogues and delicious black humour as the first three, while deepening the characters’ complexity and take on life. An extremely pleasant series that renews the western genre.

Dr. Jeronimus Quint has an unusual business model that Hippocrates would frown upon: he creates his own patients by injuring people whose lives then depend on him. His latest victims are Jonas Crow, Undertaker, and Rose, his English companion. Without the best medical attention—i.e. Quint's—each might lose a limb, or even die, from gangrene. He's kidnapped Rose and is withholding his sado-surgical skills while Jonas and his cohort Lin pursue him and his captive. With ferrymen and lumberjacks in front, angry lawmen behind, and a leg killing him from within, the Undertaker hopes to survive long enough to make Jeronimus Quint his next customer.