Isis comes face to face with Cleopatra and her bodyguard in the latest installment of The Legend of Isis. She also battles a barbarian, giant sphinx monsters, and witches. It's just a normal day at the office for everyone's favorite ancient Egyptian. But is everything what it seems? 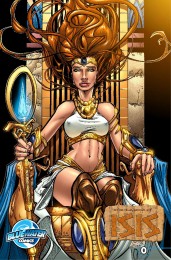 Trapped 5,000 years out of time, the would-be Egyptian goddess, Isis, must adjust to her new life in 21st Century Los Angeles. Using her mystical staff and some help from a few new friends, Isis will protect those around her from evil that may threaten their world. But how can she protect a world that she doesn't fully understand? 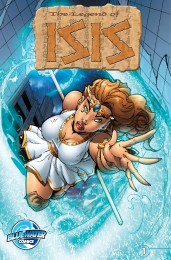 Trapped 5,000 years out of time, the would-be Egyptian goddess, Isis, must adjust to her new life in 21st Century Los Angeles. Using her mystical staff and some help from a few new friends, Isis will protect those around her from evil that may threaten their world. But how can she protect a world that she doesn't fully understand? Join Isis in her ongoing series debut as she's introduced to the modern world and its new ways of life. But it seems Isis is not the only ancient warrior alive in our time, as she must battle the mummy of Sekhent, upon her awakening from the dead! 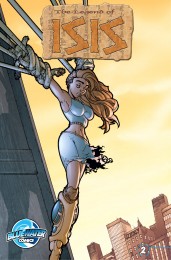 As Isis adjusts to our world, and her double life as Jessica Eisen, she encounters a deadly Amazonian warrior known as Lynx! Lynx has come to reshape the world in her Amazonian ways, and only Isis can stop her rampage. This issue also features an all-new look for Isis, as she steps into the 21st century in style! 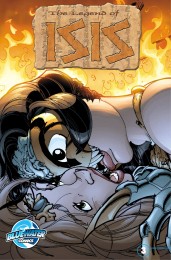 The identity of the mysterious Lynx is finally exposed, but can Isis stop her from enslaving the men of the world with her army of the undead? Meanwhile, Jessica and Crystal's relationship comes to an impasse, as Crystal accuses Jessica of trying to steal Scott away from her! 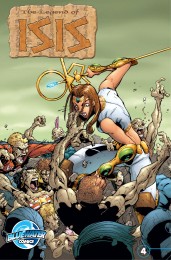 This is the conclusion to Isis' standoff with Lynx! Lynx is holding Crystal hostage! Can Isis defeat her without harming Crystal? And what happens when Jessica's secret is exposed? All of this and a mysterious figure from Isis' past returns with clues to her own origin, and the source of her power! 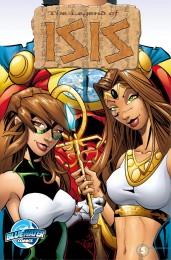 When Judo Girl goes missing, Atlas goes to Isis for help, but what they will find suggests that their friend has already fallen at the hands of an international crime syndicate known as the Under- worlders. And if Isis and Atlas can't get their act together and work as a team, they too might fall victim to the evil syndicate. 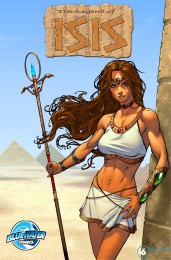 Isis confronts a new threat, known as The Council, who plan to cleanse the world of all who reject their one true god. When Scott is taken hostage, Isis-- now completely powerless-- agrees to trade her freedom for his. After the trade is complete, The Council welcomes Isis into their holy sanctuary, where she comes face-to-face with their o'mighty god herself... and Isis quickly realizes the the only person who could stop this maddening cult is the god whose word they follow. 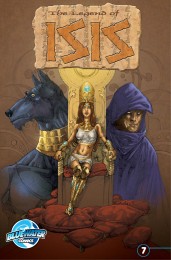 Powerless and held hostage by the Council, Isis learns their disturbing origin and how it's connected to her own, causing her to wonder, was she sent to our time to conquer us? Will Isis lead them into battle on our world to save her friend? 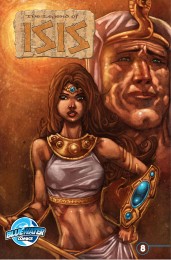 Featuring the debut of new penciller ROVE (Decoy), The Legend of Isis #8 is here! Isis is powerless and held captive by an Egyptian cult known as The Council of Isis, insisting that she is their Goddess sent by Osiris to restore the Egyptian pantheon to power! Her only chance at escape is Scott and Crystal-- but can they reach Isis before the Council uses her power to trigger the beginning of the end? 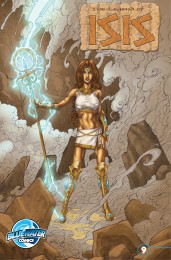 The exciting conclusion of the 'Dogs of War' storyline, as Wosret undergoes a dramatic transformation for his battle with Isis! But will Isis be able to free the Council's enslaved followers along the way, or are they lost forever? 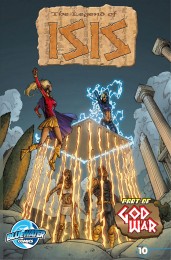 A GOD WAR CROSSOVER: "God War" continues this month with an Egyptian Goddess in the Greek Pantheon! Isis and Venus infiltrate Mt. Olympus to liberate Zeus and Hera from the Muse's prison. But why has the Muse turned against her father, and can Isis save her before it's too late? 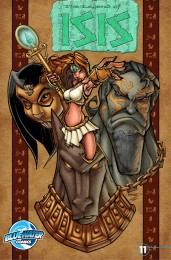 An exciting new chapter in the Legend of Isis series begins here with Part one of the "Rise of Darkness" story arc. Recovering from the events of the "God War" the last thing Isis needs is for more trouble to come her way. Her evil brother Set makes a play for Isis' life by awaking the God of Darkness Apophis. Can Isis survive this onslaught of evil? 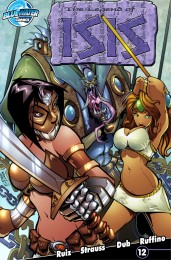 Isis has fallen at the hands of Apophis, God of Darkness. Awakening in the Underworld, Isis must discover a way to escape the land of the dead before Set’s play for power reaches a point of no return. Meanwhile, Scott is left to battle Apophis on his own until an unlikely ally appears to lend a helping hand. Can Isis return in time to stop Apophis or has her time run out? 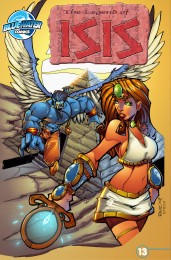 Written by the screenwriter from the Legend of Isis film at Paramount, Ali Russell. Jessica and Scott head to Egypt to attend a gala honoring Egyptology. After a mix-up with the hotel that awkwardly forces them to share a room, they meet Moussa Fusani, a leading Egyptologist who invites them on an archaeological dig of a tomb near the Great Pyramids. Unfortunately Jessica cannot bring her case, so she must leave her staff in the hotel, making herself powerless. Moussa traps Jessica and Scott in the tomb, leaving them to face prehistoric problems. 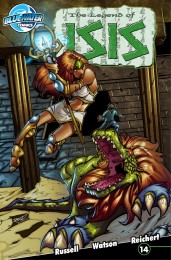 The shocking conclusion of the Rise of Darkness storyline. The battle between light and darkness comes to a shocking conclusion as Isis learns even in victory there can be defeat. Granted the powers of Ra and returned to the land of the living Isis must use her new found powers to defeat the combined forces of Apophis and Set. Will she be able to survive the Rise of Darkness? 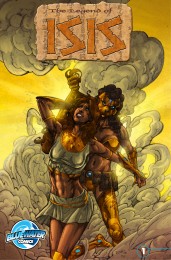 Isis is back! In the first issue of the new ongoing series, Isis' life is getting back to normal when a mysterious package arrives at her doorstep, leading her toward a battle with the gruesome Scarab Queen! The Legend of Isis has been optioned by Paramount Pictures and is soon to be a feature film! 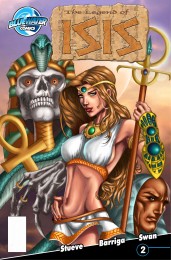 Who or what is the Scarab Queen? Why is Isis is in the hospital? Who destroyed the museum? And just who the heck is that pointing a gun at Scott? 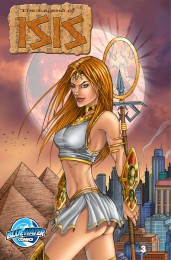 As Isis’ battle with the Scarab Queen escalates to brutal levels, Scott finds himself on the wrong side of the interrogation table. It seems ever since Isis came into his life, Scott has experienced problem after problem. Is this finally his breaking point? Were all his previous promises of always being there for Isis hollow? Before you start to get accusatory, ask yourself this: How long would you be able to live with an ancient Egyptian Goddess who attracts trouble like one of those blue electric lights attracts mosquitoes? 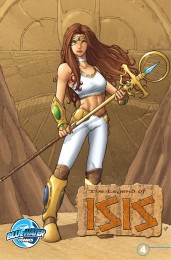 Isis' relationship with Scott is falling apart while the Scarab Queen wreaks havoc on the city! Can Isis defeat her when she has so many worries on her mind? Pick up the explosive fourth part of the Scarab Queen storyline to find out. Also, check out the last few pages of issue #4 to get a glimpse of the newest villain in Isis' rogues gallery-- Dr. Love! 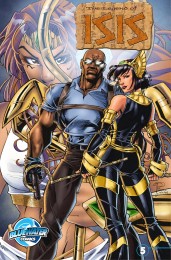 New story arch! After the sudden appearance (then disappearance) of the Scarab Queen, Isis thought she had earned a few days off. Isis thought wrong. Waking up in what appears to be an ancient catacomb, Isis stumbles across her sister... changed. Nephtys is now... good??!!!! Furthermore, she needs Isis to help her save the world. What is going on? And did you say you wanted to know who the newest stars of the TidalWave Universe are? Well, want no longer, since this issue of Isis proudly introduces the magnificent odd couple, Tony and Cleo.