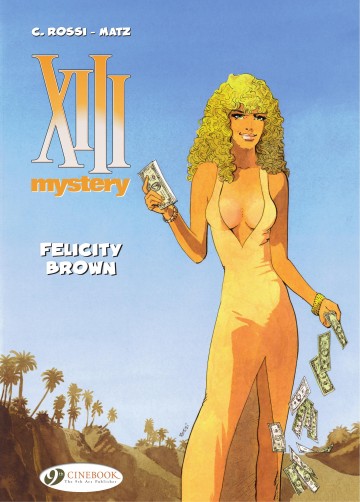 Statuesque, alluring and a literal femme fatale … Felicity Brown, former waitress, former call-girl and pretend nurse, nearly caused the end of XIII when she murdered for his money the man he believed might be his father. But crime doesn’t pay in the end, and Felicity is forced to flee from the FBI. Thus begins a bloody escape that will take the black widow to Costa Verde, into the arms of a dictator and in the middle of a revolution that will soon draw in none other than … XIII!

This digital comic is available in english version. The following reading modes are available with the izneo reader:
XIII Mystery- Volume 9 - XIII Mystery 9 - Felicity Brown - Matz - to read online on izneo or download on your iOS and Android tablet or smartphone.
eazyComics

Read the album
Add to cart
Added to your cart
V.13 - XIII Mystery
(1)
$5.99
Judith Warner was once the pharmacist in Green Falls, where XIII spent part of his youth. And she was once his ally, and lover of one night... The beautiful, independent Judith has her life turned upside down by hurricane Jason McLane just like so many others, and leaves for California to start a new life. There she leads a quiet existence, up until the day a woman she's never met before rings at her door, and throws everything into chaos once again, as her past resurfaces...
Coming soon

Read the album
Add to cart
Added to your cart
V.1 - XIII Mystery
(4)
$5.99
Become a super reader
Write reviews and get comics for free!

XIII Mystery- Volume 9 - XIII Mystery 9 - Felicity Brown - Matz - to read online on izneo or download on your iOS and Android tablet or smartphone.

Read the album
Add to cart
Added to your cart
V.3 - Tango
(4)
$8.99
For our two fugitives turned sailors, Tango and Mario, the next stop on their voyage around the West Indies is beautiful Curaçao. There they'll meet Charles, a charming Frenchman who's clearly hiding something. The three go on together to Panama City, and it's not long before Charles catches the attention of the American authorities. And they're not the only ones who want to get their hands on this expat on the run... Bullets will fly, with Tango once more caught in the middle."The Tango series is perfectly escapist comics, with plenty of welcome cinematic parallels." Women Write About Comics

Read the album
Add to cart
Added to your cart
The Complete The Killer
(0)
$39.99