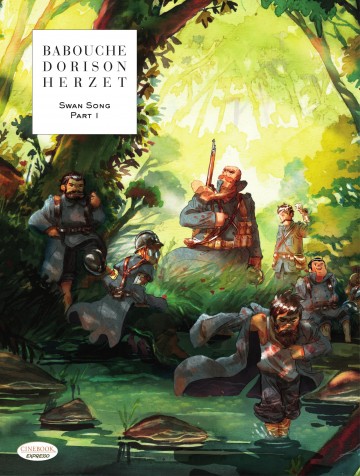 It’s April 1917, and the war has raged in Europe for three years now. Both the Germans and the French are huddled in their trenches, and pushing the frontline by even a few meters is suicide. Yet, general Nivelle is planning a huge campaign - he’s sure that a massive artillery barrage on German lines, synchronized with massive infantry movements, would ensure a French victory in 48 hours. However, the planning took too long, and the Germans already knew what’s in store for them. So Nivelle’s raging yet futile attacks only result in massive casualties - and as the troops’ morale drops, their hate for the arrogant general only flares brighter. After yet another useless slaughter,. lieutenant Kazinski’s men find, drenched in the blood of their comrades, the fabled Hill 108 petition - a petition signed by tens of thousands of soldiers, asking for justice against the generals that sent them to death, knowing full well the Germans are aware of their attack plans. When the higher ups pressure Kazinski to destroy the petition (if found), and when the same higher ups’ stupid decisions lead to yet another disaster, Kazinski finds himself an unexpected paragon of justice… “As Good As Dead” is a tense, rough story that rings true - Dorison & Herzet flawlessly mix history and fiction, providing a script that fully uncovers the horrors of “the war of the trenches”. Babouche’s art is surprising - there’s a lot of sun on the battlefields, and the cartoonish, almost manga-style approach to characters clashes with the seriousness of the story. And yet, somehow, it works.

1917. Nivelle – ‘the butcher’ – commands the French Army, and the attacks he keeps ordering are pointless slaughters. The soldiers can’t take it any more. Discontent is turning into rebellion, and a petition is being circulated in secret. When it makes its way to the men of Sergeant Sabiane, something snaps in them, and what begins as a simple cry of defiance becomes a full-blown mutiny when a handful of them decide to take the petition to Paris …

Continue summary
Swan Song- Volume 1 - Swan Song Part 1 - As Good as Dead - Xavier Dorison - to read online on izneo or download on your iOS and Android tablet or smartphone.
eazyComics

Read the album
Add to cart
Added to your cart
V.2 - Swan Song
(1)
$8.99
Lieutenant Kazinsky has finally proven his loyalty once and for all to his small band of rebels. The ambush he set for their pursuers with Sergeant Sabiane destroyed their vehicles and even injured their leader, Morvan. But ‘the Puzzle’ never gives up on a prey. Soon, the mutineers must face the hardest choice of all. Continuing means killing other Frenchmen. Stopping means abandoning their friends, maybe even betraying them. In the end, do they even stand a chance of succeeding?
eazyComics

Swan Song- Volume 1 - Swan Song Part 1 - As Good as Dead - Xavier Dorison - to read online on izneo or download on your iOS and Android tablet or smartphone.
eazyComics

Read the album
Add to cart
Added to your cart
V.3 - HSE
(0)
$5.99
Felix’s meteoric rise to the top has brought him much, but it also cost him dearly. Rachel has left him. His shareholders keep demanding ever more from him. Desperate, horrified, the young man is losing himself – but even that he is not allowed: Simon, the father of the HSE himself, puts him back on the right track by force. Because, in the public’s eyes, Felix is a success story, hope … And for the HSE, he’s the future of finance.
eazyComics