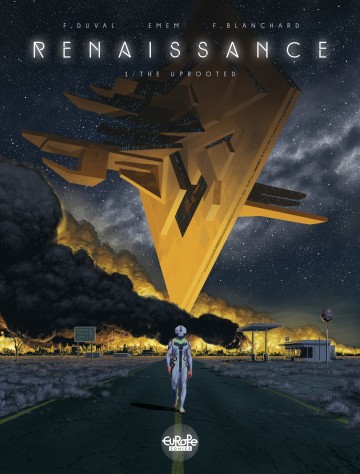 2084, The Earth’s global mass extinction: the Tricontinental Council, in a very far away galaxy - peaceful, beautiful and unknown of humans - holds a very heated debate on the value of intervening in a world outside their system, to save several forms of intelligence that can no longer manager to live together, have proven incapable of managing their resources and are headed towards self-destruction: On the other hand, Humans have also developed subtle poetic and artistic expression, potentially unique in the whole universe. Can the much further advanced alien civilisations thriving on justice and morals help the Earth without subjugating human-beings? The latter are indeed known for their aggressiveness and their formidable weapons. Swänn and Sätie, newly weds, are sent to Earth, where they’ll meet Helene et her family, in a yet again-flooded Paris, and Liz, the chief engineer of a Texan oil field firefighter brigade, oil field on the verge of explosion. ***** Renaissance V1 is a great start to an interesting series reflecting on whether our species is worth saving at all, what we collectively would be capable of, if, magically, a deus-ex-machina ever came to our rescue and offered us a second chance, and – more to the point – what it would take to really save us, with or without aliens, if we ever were in this situation. But, after all, we have nothing to worry about, right ? It is not as if there were big floods, droughts or tsunamis; it is not as if oil fields were burning; It is not as if nuclear plants had gone into meltdowns; it is not as if pandemics were swiping the planet; it not as if ghost governments had long given up on their responsibilities; it is not as if obscure algorithms were making a mess of real life, right ? Or ….

Renaissance, vol 1 is written by Fred Duval, with artwork and colors by Emem, and design by Fred Blanchard. The story is set in the future. Earth is ravaged by disease and conflicts, which leads an alien species to pay us a visit. I liked this book, but it wasn't as engaging as the authors desired. The premise is good though, its an intriguing idea that earth's failures would lead to an alien intervention. The execution of the plot points is also done quite well. I guess the problem might be the characters. At the conclusion of the book you don't really feel attached to any of the protagonists, and therefore it's hard to really care about the story. The art is not really helping things as well. It's nicely done, and often beautiful, but it's a bit bland to be honest. It's doesn't really breathe life into the story and the characters. Renaissance, vol 1 is still an interesting read, despite its shortcomings, and maybe subsequent volumes can improve on the foundation that's been laid out this far in the story.

Swänn and Sätie were born on Näkän, a major planet in the Complex, a federation of extraterrestrial civilizations. The young couple hoped to live a peaceful life in an environment where nature and technology coexist in balance. But they are forced to mobilize when the leaders of the Complex decide to launch a vast expedition to save a planet that has exhausted its resources: Earth."Renaissance V1 is brimming with mature ideas that aren't grounded in tired tropes or genre sensationalism, but rather in service of credible drama that is bolstered by Emem's full realization of the planet of Nakan and the culture that lives on it, as well as the crumbling Earth that turns out to be the stage not for over-the-top spectacle, but for more quiet, interpersonal discovery between inhabitants from different worlds." The Comics Beat

Continue summary
Renaissance- Volume 1 - Renaissance 1. The Uprooted - Emem - to read online on izneo or download on your iOS and Android tablet or smartphone.

Read the album
Add to cart
Added to your cart
V.3 - Renaissance
(3)
$5.99
Swänn et Liz are pursued by Skuälls poachers, responsible for the death of the Hamilton family. Swänn confronts the realities of the war and readies himself to announce the news of the casualties to their families. And yet, there is hope for Liz. In the meantime, on Näkän, debates about funding for the Renaissance expedition continue and, oddly enough, Skuäll diplomacy takes on an usually important role. This masterful volume concludes the first story cycle in this gripping series.

Read the album
Add to cart
Added to your cart
V.1 - Renaissance
(4)
$5.99
Our Feel Good Reading List
Comics, Manga & Graphic Novel that will cheer you up :)

Renaissance- Volume 1 - Renaissance 1. The Uprooted - Emem - to read online on izneo or download on your iOS and Android tablet or smartphone.
New

Read the album
Add to cart
Added to your cart
V.20 - Last of the Atlases
(0)
$2.99
Birds wasting away in a national park, refusing to migrate. Identical geometric markings on the wings of completely different insect species. A pillar of dust in the desert. A small-time hood travels to India's shipbreaking yards in search of a giant nuclear-powered construction robot. A big-time crime boss makes a killing off the Algerian Revolution, in a world where it happened fifteen years later than in our own. "A good story," insists reporter Françoise Halfort, visited abruptly by a post-menopausal pregnancy, "is one that draws unexpected connections between seemingly unconnected events." Four star creators join talents on a vast canvas that takes in the entire French 20th century.
New