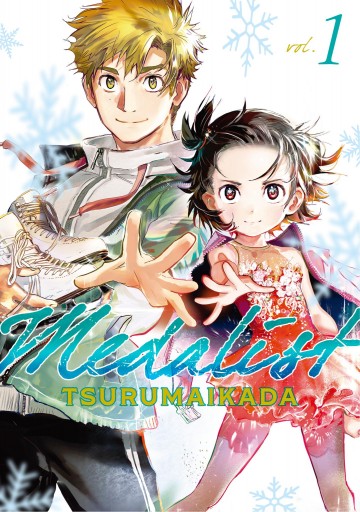 Tsukasa is a 26 years old former ice dancer that never made it big. He started competing really late, he got his first coach at the very ripe age of 20, and - despite his best efforts - he only managed to reach 4th in the pairs Ice Dancing section of Japan’s Figure Skating Championships (“All-Japan” - the most prestigious ice skating competition in Japan). While visiting his partner’s ice skating club, Tsukasa meets a tiny girl that seems out of place - she’s all alone. Worse still, when confronted, she panics and bursts into a run - is she a freeloader? Obviously, the cute, shy and fearful kid is this series’ true star, and following her first steps in the harsh, ultra competitive world of ice skating is simply a joy. “Medalist” doesn’t stray far from the usual sports manga template, but the main characters make it shine; they are not just very likeable but eminently relatable, too - we all have that dream we feared to follow, right? The dozen extra characters introduced (mentors, rivals, competitors, friends, family…) are also very well done, each of them a distinct personality despite the limited page time. The art is amazingly cute, the story has a ton of funny moments, and I just couldn’t put this down until it ended - and I’m basically a fair weather ice skating fan - I only watch when it’s pushed into normal TV schedules, i.e. during the Winter Olympics and (maybe) the World Championship finals. I have a feeling I’ll follow this series religiously, though.

Tsukasa, whose dreams were crushed. Inori, left to fend for herself. These two share a dream...and their tenacity may be the only thing that sees them through. Their destination? The ice...on the world's stage!

Continue summary
Medalist- Volume 1 - Medalist 1 - TSURUMAIKADA - to read online on izneo or download on your iOS and Android tablet or smartphone.
New

Read the album
Add to cart
Added to your cart
V.3 - Medalist
(1)
$10.99
On the ice, there are no absolutes...and that's why you can change your destiny at any moment! The West Japan championships, Inori and Tsukasa's first regional challenge, is underway! Using the two double jumps she's learned through intense training, the two of them must face off with the best that the powerhouse skating clubs of western Japan can offer!

Read Isekai!
All about fantasy...