Quest For The Time Bird 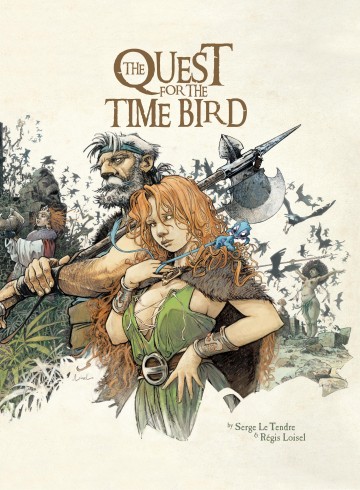 The Quest for the Time Bird - The Complete Collection (4 Volumes)

This is unanimously considered a reference work in heroic fantasy comics - French comics, that is. And I have to concede that for 1983, when the first tome was published, this must've been quite a shock. But reading this for the first time in 2021 was a difficult experience. Régis Loisel became better and better at drawing as time went by (the last of the 4 tomes enclosed in this omnibus appeared in 1987) and his art is the major redeeming quality of the series. Serge Le Tendre uses way too many words, so many that pages get chaotic and a simple, straightforward story gets hard to read. The saga starts weakly, the first two tomes are nothing special, with standard action and some laughs here and there; the third tome is probably the best of all at fulfilling a fantasy reader's expectations, and is my favorite by far, and the fourth finally goes into an unexpected direction - just to end with the most predictable ending of all time (yes, love wins). Still, this is indeed a saga to read, because it perfectly captures the carefree spirit of the 1980s French comics. Don't baulk at the price, you'll get four books for the price of one, plus the 12 black/white pages that make the 1975 short-story version of the saga. Recommended, even just for the 3rd tome.

The world of Akbar is on the brink of chaos. The evil god Ramor will be released from his prison, and there’s only one thing that can stop it… the legendary Time Bird. It’s up to the beautiful young Pelisse to find it! Accompanied by her magical friend, Furry, and the aging knight, Bragon, they have only eight days to save their home. This cult classic from legendary creators Serge Le Tendre and Regis Loisel is a fantastical epic adventure!

Quest For The Time Bird- Volume 1 - The Quest for the Time Bird - The Complete Collection (4 Volumes) - Serge Le Tendre - to read online on izneo or download on your iOS and Android tablet or smartphone.
eazyComics

Read the album
Add to cart
Added to your cart
V.5 - Chinaman
(1)
$5.99
At Kinney Trading Post, John Chinaman gets accosted by a pair of bounty hunters when a good deed from his past returns to haunt him. But soon, all three of them have bigger troubles on their hands: the Yagger brothers have waylaid a would-be schoolmarm and her wagon driver in the woods. When the trunk they believed full of gold turns out to be full of books, Chinaman leaps in to save the schoolmarm's life. Their perilous escape through Paiute territory involves running rapids on a raft, dodging vengeful bandits, and hardest of all—learning to trust each other.
eazyComics