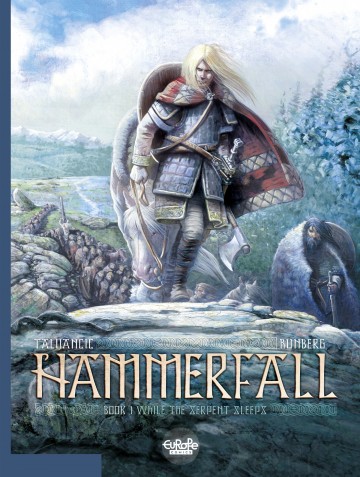 In the spring of 794, Ulf the White’s warriors raid a monastery in Jarrow, Northumberland, to get their hands on holy relics. Jarrow is of great significance to the Christian West, as new paths of ecclesiastic thought are being opened up there. It is the beginning of a war that would change the course of history. In winter of that year, in a land where the forest meets the sea, the land of the Svear, Harald whets his skaldic talents and embraces his beautiful bride to be, Lina. However, on his wedding night, the whole village is attacked by merciless troups under the command of Björn Jörgensson, the Banished. “For Christ” is their killing mantra. Arno of Salzburg, Charlemagne’s special envoy and expedition backer, does not always approve Björn’s cruel and somewhat unchristian attitudes but is very keen on the ultimate objective, Ulf the White. Harald and Lina join the Svear slave convoy, in the hope of being reunited and escaping, without knowing they are the price of safe passage onto the Skanes’s land. The war of the Gods, opposing Franks and Scandinavians, humans and non-humans, has begun. ***** In the first volume of this Nordic saga, somewhere between History and Legends, Sylvain Runberg and Boris Talijancic take obvious pleasure in drawing Vikings, their ways of life and their pantheon of gods, as realistically as possible. The glossary at the beginning is a great way to quickly learn just that little bit more about mythologies and peoples of that time. An interesting start.

Hammerfall, vol 1 is written by Sylvain Runberg, the artwork is done by Boris Talijancic, with Irène Häfliger as colorist. The story takes place in Scandinavia during the era of the Vikings. During a wedding celebration a village gets attacked, and the couple is taken as slaves by the intruders. This is a very good story. It has multiple layers, some which are only implied throughout the book (and which will surely be fleshed out in subsequent volumes). Beyond just the fate of those getting captured there's also a larger political strategy going on. This broad scope makes the story more interesting and provides a richer fabric to the world that's depicted. The writer adds these elements while still keeping the story simple and easy to follow, not all writers are able to do that. The artwork serves the story very well. The scenery is beautiful, and there's a nice energy to the art that heightens the action of the story. You can sense that the artist had a lot of fun depicting the characters and the culture of this historic context. All in all, Hammerfall, vol 1 is a book I can definitely recommend. It has an intriguing story to tell, with the setting in a popular historic era as an added ingredient.

In 8th-century Europe, a clash of cultures and religions inevitably leads to a clash of swords. This harsh, changing world suits Björn the Beautiful, who has a single passion: violence. His bloodlust led to his exile from his native land, and it's his bloodlust that brings him back. For Harald, it's the season of Jul and he's about to marry the gorgeous Lina. The festivities are interrupted by the arrival of Björn and his troops. With his people either slaughtered or enslaved, Harald begins a forced march with the other survivors. He wants revenge, but he must be patient like the serpent: know when to sleep, and know when to strike.