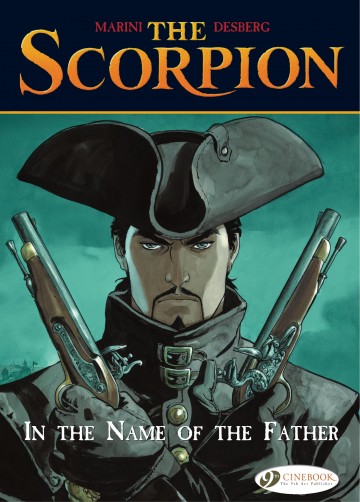 The iron fist of Trebaldi’s monks is still strangling Rome, but such an army is expensive. To pay his men before their loyalty begins to slip, the Pope must rely on the financial assistance of European monarchs—and a large sum in gold is coming to Rome. But such a convoy is tempting to many! Trebaldi, the Nine Families, thieves and conspirators... And all figure they can use the Scorpion against each other to obtain what they want.

Read the album
Add to cart
Added to your cart
V.8 - The Scorpion
(4)
$8.49
The Stone Cross: The Scorpion, whose mother Cardinal Trebaldi burnt at the stake for loving a man of the cloth, discovers that his father was the murdered Pope himself. When Trebaldi addresses a huge crowd at the end of the mourning period, the Scorpion is there to tell the truth about how the people's beloved Pope died.The Devil in the Vatican: Trebaldi claims that the sacred cross of St Peter miraculously appeared in his castle. The Scorpion must find the real cross if he is to prove Trebaldi's treachery.This two-volume book includes "The Stone Cross"
eazyComics

Read the album
Add to cart
Added to your cart
V.8 - Black Op
(3)
$5.99
Agents Janine Hallbeck and Sol Kathren, posing as husband and wife for their mission, were sent to Tehran in early 1973, on the trail of a priceless secret: the plans for a financial and petroleum manipulation that would have severe repercussions throughout the entire world. The problem is, nobody at the CIA wants to believe it. Except, perhaps, those who see a golden opportunity to line their pockets!
eazyComics

Read the album
Add to cart
Added to your cart
Bagdad Inc.
(4)
$8.99
eazyComics