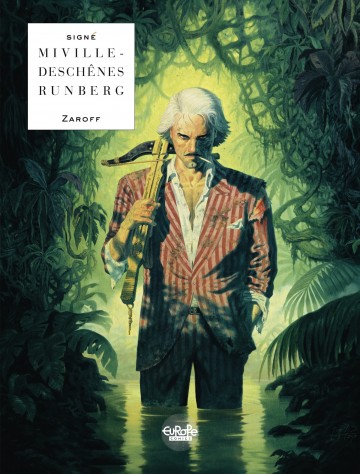 1937: An island somewhere in the middle of the ocean, which Count Zaroff has chosen as his new hunting ground. He's tired of hunting the usual game — animals are far too easy to kill. He has set himself the supreme challenge: a prey that is both dangerous and unpredictable, in fact the only prey worth hunting — people. But when the Count brings down a Mafia boss, the "family" lands on the island looking for revenge. Suddenly, the roles are reversed and the Count finds himself being hunted. To make matters worse, the Mafiosi have kidnapped the Count's sister and her children and brought them to the island. If Zaroff doesn't find them soon, they'll all be killed. And he'll be next.

Read the album
Add to cart
Added to your cart
V.4 - Hammerfall
(0)
$5.99
As our saga reaches its conclusion, old scores are settled, new lies are told, and the spilling of human (and non-human) blood continues. Each band of travelers engages in battles where victory might mean the difference between love and love lost, life and death, or the recovery of an ancient relic. Deceit and treachery are countered by steadfast honor and promises kept. The clash between the old gods and a new one can be heard in the sounds of swords piercing flesh, and wind whispering past bodies swinging from the trees. In the lands of "Hammerfall," things are rarely as they seem.
eazyComics