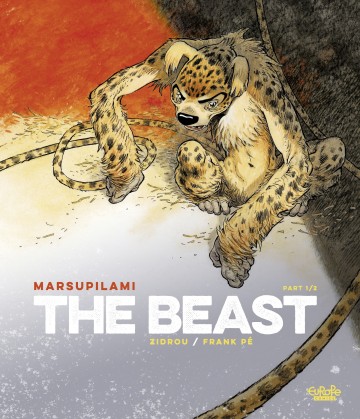 Amazing rework of Marsupilami's origin! [If you don’t know who Marsupilami is, it’s a fictional animal created by André Franquin for the Spirou magazine, back in 1952. The name comes from “marsupial” and “ami” - friend.] Zidrou’s story is simple but effective - after a nightmarish voyage, caged in the depths of a cargo ship, the Marsupilami, more dead than alive, reaches Bruxelles, where a kid finds him and nurses him back to health. The kid has his own problems - he’s bullied at school for being the son of a German soldier (the story takes place in the fifties, and the anti-German sentiment was very strong then), his mom is poor and overworked and alone, his sympathetic and progressive-minded teacher is bullied by the school’s director, and the rich kids rule the school. But life is still fun when your home is full of animals… Frank Pé’s art is amazing, he always loved drawing animals and nature so he’s having a blast here (check his Broussaille and Zoo series, too). The only drawback of this volume? It’s just the first of two. And AFAIK the second is planned for… 2022 :( I definitely hope it’ll land sooner than that.

Belgium, 1955. A mysterious animal is caught in the jungles of South America and transported to Europe on a cargo ship, where it ends up starving and half-dead on the outskirts of Brussels. François, a young boy with a fondness for taking in strays, finds it and brings it home to his mother and his menagerie—his best and only friends. As the son of a departed German soldier, François is the favorite target of every bully in school. Nobody can identify the strange creature with the voracious appetite and the stupendously long tail, and François figures his new pet is perfect for show-and-tell... But with a wild beast and a small classroom, things quickly get out of hand. Will this spell the end for François's new animal friend? The real story of the legendary Marsupilami!

Continue summary
Become a super reader
Write reviews and get comics for free!

Read the album
Add to cart
Added to your cart
The Whale Library
(1)
$8.99
A poetic fable for grown-ups full of wisdom and beauty, by two Belgian masters of graphic storytelling.Out on the high seas lives a whale unlike any other, who spends her days reading stories to all who will listen, taken from the vast library hidden in her belly. When the whale bumps into a sea postman's boat one fateful night, it's the beginning of an extraordinary friendship. But not every story can have a happy ending...
eazyComics